​As we are getting the construction underway, we are inviting the public to share their memories of past events at the Humboldt Auditorium. Send your memory to Linda Dovel at lddovel@gmail.com 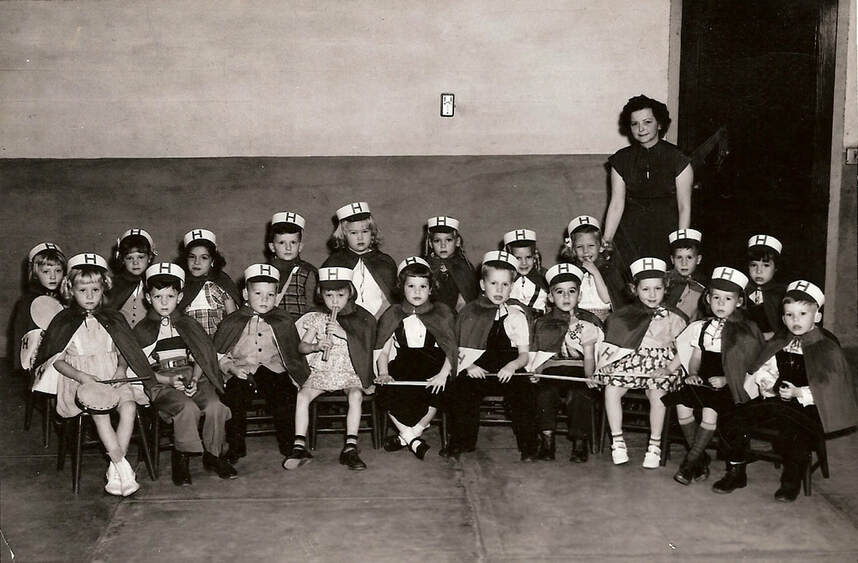 I have lots of memories of time spent at the Auditorium during my youth. It began with a performance by my kindergarten class rhythm band (HHS Class of 1963) under the direction of teacher Eleanor Johnston, who was a member of the McDowell Music Club which met monthly at the Auditorium. Then there were Saturday afternoons spent roller skating and annual Christmas Y-Teen dances. I got to play piano on stage for the Lions Club Talent contest and still have the trophy.
The Chamber of Commerce met monthly at the Auditorium for their dinner meetings. While Dad was president, I provided dinner music for many of them. That year it rained all three days of the fair. The coordination program was moved to the Auditorium and it was packed to the balcony…the only time I remember it being that full. Governor Morrison crowned the king and queen and was late in arriving. Ahh the memories.
I’m sure all of the baby boomers have many memories of events there. I’m so glad to see it being modernized so it can be used again. Many thanks to all of you for your time in making this happen.

A note from Linda: Gwen included with her memories a very generous donation to support the Auditorium renovation project. The contribution was in memory of her parents, Albert and Darleen Watsek. Albert was the postmaster at Humboldt for 27 years retiring in 1983. See our "SUPPORT & DONATE" tab to make your contribution to this worthwhile effort.
​Auditorium Memories
The following is the first of a series of memories initially published March 15, 2018

I was born, raised, graduated from, and came back to live . . . in Humboldt, NE.

As a child, in the 1950's and 1960's, I can remember Chicken & Biscuit Dinners prepared and served in the Auditorium basement by the ladies of the Humboldt Presbyterian Church. Usually these dinners had been prepared and served in the Social Hall of the Presbyterian Church, but the dinners were so well received and attended that the church simply didn't have enough room to accommodate all of the "diners."  So, the Auditorium was rented and the food preparation and serving was done in the basement of the Auditorium. The kitchen was much larger than the church's and more tables/chairs could be set up for the crowd.  Of course, my paternal grandmother, Fay (Lynch) Carsh, and my mom, Marie (Tannyhill) Carsh, were loyal church workers who helped make this fundraiser a success.  The Auditorium kitchen had cupboards and drawers full of the heavy glass dishes, cups, water glasses, and silverware to use, that were included in the Auditorium rental.  My role . . . when I was "old enough", along with my sister and the other Presbyterian youth, was to help pick up the plates, silverware, glasses, and cups from the tables where they, then, were taken to the kitchen to be washed.  We helped dry those clean dishes and put them back in the Auditorium's kitchen cupboards.  No disposable paper products, plastic ware, or styrofoam cups were used at that time. It was just like a "family reunion" where our church family got together and worked to help the church's financial support.

My memories of Humboldt City Auditorium..
My first notable memory was the winter of 1947-48 at roller skating rink located on main floor. That winter season my fiancé Warren Dorland was manager. I was attending the University of Nebraska in Lincoln, we were to get married in May. Every weekend I would come home and Friday and Saturday night were at the rink. It was really a lot of fun, lots of teens came there were all kinds of “special” skate games, ladies choice, circle skate and change partners as instructed and many others. I am sure there are senior citizens that remember many others. I had my own special pair of shoe skates. The exact number of years and how long it was there will have to be documented by someone else.
I remember going to meetings there with my mother, the Federated Women’s club known as the Alpha Club met there for special occasions, regular meetings were in the library which was upstairs over where the library is now.  We had both Rist Family Reunion and Friedly  Reunion there. I especially remember 1954 Rist Reunion it was the 100 year special get together. There were over 200 people in attendance. My uncle Boyd Rist made a pamphlet with pictures of 12 Rist farmers in Humboldt area. Frank Rist had a hog mineral business and raised Poland China hogs. Maybe some of the readers remember seeing those huge hogs on display at the fair.
The 1950 ‘s were busy ones at the Auditorium.  All kinds of meetings were held there. As a farm wife and mother, I was involved in some of them. I belonged to two Project Clubs later known as EHUs. A representative from the County Agent’s office would come and present a lesson.  Each club sent someone to get the lesson and materials to bring back to their club. The ones that I attended were in the  basement of the Auditorium.
My oldest daughter, Elizabeth, took tap dancing, ballet and acrobatic lessons in the basement of the Auditorium in the mid 1950’s. The teacher came down from Lincoln and was there on Saturday nights. As a result of taking these lessons, she and Gerry Leigh Asa were asked to dance at the Queen Coronation in September 1957. Well, it rained and rained, so the Coronation was held in the Auditorium that year.
The 1956 Alumni Banquet was held in the basement of the Auditorium. I remember this because it was my 10 year anniversary. My high school classmate and good friend, Mariella Williamson, sang a solo and I accompanied her.
The Auditorium was a really busy place in the past. I am so glad that it is being renovated and made accessible so that it can once again be a great asset to the community.
​
​
Proudly powered by Weebly